Library of classes and tools useful for development with the Microsoft .NET Micro Framework. This library originally shipped as part of the SDK for the EmbeddedFusion Tahoe Development kit [1]. All of the code was covered by a BSD like license, however since it was only included in the Tahoe kit that fact was lost and most users didn't realize that. So the plan came to place the code up on CodePlex [2] so there as no confusion about what is covered under the BSD license.

Today I got a Embedded Master [1] development kit from GHI Electronics [2]. First I tried the examples that are already on the board, wow, working great. To get a network application working I had to change the IP address (or change it to use DHCP). I downloaded MFDeploy [3] (MSDN Library [4]) from the Microsoft Download site. The manual says that you have to enter 00-21-03-80-00-00 and for the last two numbers you have to use the hex value of the serial number of the board. I tried this but MFDeply didn't accept my value until I have noticed that I have to use the colon instead of the dash as separator. 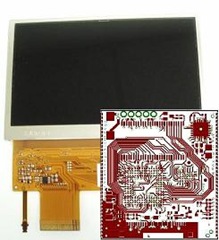 Embedded Master Module is adding support to TFT LCDs [1]. The new version is based on LPC2478 processor with built in LCD controller. The module includes a 0.5mm 40 pin connector for LQ043T3DX02 or LQ043T1DG01 TFT displays from Sharp. These color TFT LCDs are 480x272 and are compatible with LCDs used in PSP from Sony. Using any other TFT LCD is possible, as well.. The new board will have 70 pins instead of 60 with more Analog inputs and PWM pins. New board is backward compatible as far as the old pins. All new pins are on the extra added space, total size 1.55x1.8 inches.

More an more devices are ready for the Microsoft TCP/IP stack that is available with the .NET Micro Framework version 2.5 introduced at the EmbeddedWorld2008 in Nuremberg.

As there are some questions on how to run Ajax.NET [1] on IIS 7 (i.e. Windows Vista) in integrated mode instead of classic mode here are two things you have to check:

I came across a great post about updated Silverlight 2 roadmap [1]. 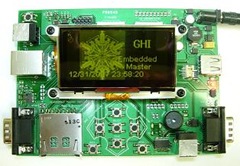