Yesterday I was playing around with Google Chrome [1]. Yes, it is a very simple UI and I love this. One of my comments at the IE8 roundtable in Berlin was that I would like to get all the options and configuration dialogs replaced by a HTML page inside the browser (similar to about:config). Well, when playing with the history search which looks really cool I noticed that Google crawls all my content. It doesn’t matter if you are using http or https. 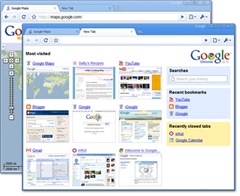 Google Chrome is a browser that combines a minimal design with sophisticated technology to make the web faster, safer, and easier.

Google has announced their own Web browser called Google Chrome, the Browser War 2.0 has been started. Here are some useful links:

Yesterday Google announced [1] that they are working on a own Web browser. The first beta version will be available for Windows today in more than 100 countires, Mac and Linux versions are coming soon. An official starting point could be http://www.google.com/chrome [2] as it returns an http error 404 instead of a simple redirect to the Google search.

How do I hack a web site?

On next Tuesday I will talk at the .NET User Group in Munich / Germany [1] about following topics:

My friend Philipp Lenssen [1] wrotes some days ago about the German magazine DotNetPro which offers different html output when Google's crawler is fetching the site.

During the weekend I found an script error on the Google pending members web page. Because I was using the new Google groups beta interface I didn't looked on it. But today the script error still occurs and I noticed the same error on the older version, too. I had a look inside the generated html output and found that there was a script tag that was not closed, ah, it was a membership request message.

Google offers a new search engine service that can be personalized. I have created a first test that will only return results for AjaxPro (hopefully):

Google offers a great way to search for source code: http://www.google.com/codesearch [1]. If you search for RegisterTypeForAjax [2] (which is the method to create the JavaScript proxies for AjaxPro [3]) you will find a lot of examples:

AjaxPro at Google Groups with more than 4.000 members

Today the Ajax.NET Professional Google group [1] has reach the 4.000 member border. I did a search for AJAX [2] for all the Google groups available and was very happy to see my group at the second top position. Only Google with the Google Web Toolkit hits this group with additional 500 more members.

While I was on a busines trip I started to write a small application that is using the Windows Mobile 5 GPS API to get the current location. After this I build a small web server that was running on the Windows Mobile device to offer a small web application that will show the current position on the Google Map, very funny application. I hope I can fix some bugs when there is no signal. The next step was to get a list of available wireless networks at the current location, added some pushpins to the Google map and... the result is a own map of wireless access points.

Without any comment, have a look at these images from Google Trends LABS:

Today I got an error message in .NET 2.0 ("Failed to start monitoring changes to...", error code -2147023570). Try to search for this error code with Google you will get a funny result: Click here [1]. I could only get the root page of all the domains, no page could be found that was not the default web server page, no file in a subfolder. In the top you will ses that there are about 9.670.000.000 including this number. You can find this number if you click on the cached version of the search result, the url of the cached item will look like this: