The Smart Grid Innovation Contest is an open international competition to find new, sustainable Smart Grid business models and technologies for the near future. 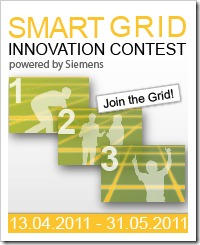 Siemens believes in the future of the Smart Grid for a more sustainable world – a vision of intelligent, flexibly controllable power generation, distribution, and consumption. The breakthrough of Smart Grid applications, though, strongly depends on attractive business models that combine technologies and economic benefits. The Smart Grid Innovation Contest consists of two phases: during the first phase, ideas are generated and developed in a collaborative community. In the second phase, universities are invited to submit research proposals to further elaborate and develop ideas.

Call for proposals (for universities) from October 4 to November 30, 2011. Siemens will award €15,000 and a workshop trip to Berlin together with Siemens Smart Grid experts to the five best ideas and the most valuable contributions. In a joint effort with several universities, more than €1,000,000 will be invested to translate the participants’ ideas into innovation. The contest addresses your creativity and your local expertise in making energy systems smarter and more environmentally friendly.

Watch an idea grow, through suggestions, comments and ranking, into mature and realistic innovation!