EntryPoint not specified for manifest – VS 2008 SP1 (beta)

Just for your information if you have tried the .NET MF 3.0 beta 2 [1] with Visual Studio 2008 and installed SP1 beta: when trying to compile a console or window application (library projects are ok) you’ll get an error message after compiling:

As defined in 1999 (RFC 2616 [1]) "clients that use persistent connections should limit the number of simultaneous connections that they maintain to a given server. A single-user client SHOULD NOT maintain more than 2 connections with any server or proxy. A proxy SHOULD use up to 2N connections to another server or proxy, where N is the number of simultaneously active users. These guidelines are intended to improve HTTP response times and avoid congestion."* Since developers are using AJAX or AJAX-like requests to update a Web page the http limits are discussed [2] more [3] and more [4].

XBee and Converter Boards from Droids

Last weekend I have started to look at wireless communication for .NET Micro Framework devices. At Droids [1] I found really cool boards for USB and serial connection, simple put the XBee module on the board and use it from your device. 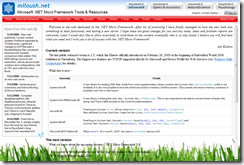 Yesterday I brought up the question [1] if there could be a change to the address bar of the next version of Internet Explorer [2]. Since I’m using Windows Vista I’m very happy with the new view of the path in explorer.exe. It is very easy to navigate to parent folders by simple clicking on the part of the name. If you click on the small arrow you’ll get a list of folders that are located in the same folder.

Internet Explorer 8 [1] is in beta and we're able to improve features that we need. Last week I sent a short message to the Microsoft DPE here in Germany with some comments what I like more in Firefox 3 [2] than in Internet Explorer. Well, there are a couple of great features like the star-it function to easily bookmark a Web page. Another great feature in Firefox 3 is that you are able to input any part of a visited URL or parts of the title that a visited page was using i.e. when you want to open Google Analytics you only have to enter "analy" and select the URL below, really clever. 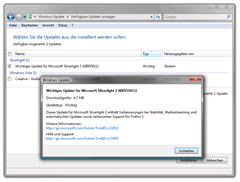 Since yesterday there is an update available for Silverlight 2 [1]. This update improves stability, media streaming, and the auto-update component. This update also improves support for Firefox 3 [2]. 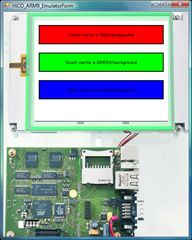 Pavel Bánský [1] explains how he did connect the Digi XBee module [2] to the Tahoe development board [3]:

Another great article on remote control using the .NET Micro Framework and the Tahoe 3D accelerometer [1] I found on Jens blog [2].

Pavel [1] has some great posts on his blog about robotic vehicles using the .NET Micro Framework [2].

Carlo Mendoza is modifying the i.MXS board for SPI:

Embedded Master Module [2] is adding support for TFT LCDs on their .NET Micro Framework device. The new version is based on LPC2478 processor [3] with built in LCD controller. 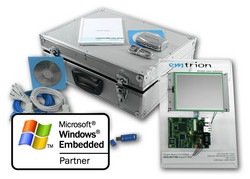 Emtrion [1] offers a .NET Micro Framework starter kit with an HiCO.ARM9 (AT91RM9200) [2]. The latest firmware updates adds support for ethernet as well as support for the TFT touch screen display.